Delve into the deeply engraved culture of Japan. Traditions dating back thousands of years ago and is still engraved into the hearts of the people. A society that continuously grows and shifts between fads and fashions. Technological advancement that leaves everyone in awe and wonder; co-existence between different religions and beliefs; superb Japanese cuisine and many other things which make the culture in Japan worth seeing and experiencing first-hand!

Tokyo is one of the 47 prefectures of Japan.Tokyo is in the Kantō region on the southeastern side of the main island Honshu and includes the Izu Islands and Ogasawara Islands. It is the capital of Japan, the center of the Greater Tokyo Area, and the most populous metropolitan area in the world. It is also the seat of the Japanese government and the Imperial Palace, and the home of the Japanese Imperial Family. Tokyo Metropolis was formed in 1943 from the merger of the former Tokyo Prefecture and the city of Tokyo.

The current Imperial Palace is located on the former site of Edo Castle, a large park area surrounded by moats and massive stone walls in the center of Tokyo, a short walk from Tokyo Station. It is the residence of Japan’s Imperial Family. We will have access to the East Garden Only.

Zen is a form of meditation that means, achieving peace, clarity and self-discovery, all while sitting on a cushion. It is believed that through the practice of zazen, Buddha achieved enlightenment. Zen meditation helps individuals to detach themselves from the pleasures and sorrows of the material world.

Hakone is part of the Shizouka Prefecture, less than 100 kilometers from Tokyo. It is famous for its hot springs, outdoor activities, natural beauty and the view of nearby Mt. Fuji. Hakone is one of the most popular destinations among Japanese and international tourists looking for a break from Tokyo.

Lake Ashi or Hakone Lake, is a scenic lake in the Hakone area of Kanagawa Prefecture in Japan. It is a crater lake that lies along the southwest wall of the caldera of Mount Hakone, a complex volcano. The lake is known for its views of Mt. Fuji and its numerous hot springs. A number of pleasure boats and ferries traverse the lake, providing scenic views for tourists and passengers.

The Central Alps Komagatake Ropeway, which opened in 1967 as Japan’ s  first mountain ropeway line, runs up to the Senjojiki Cirque directly below Mt. Hokendake. Chuo Alps Kanko celebrated its 50th anniversary in 2013. From the top of Mt. Komagatake (elevation: 2956 m, 9698 f t.), the main peak of the Central Alps, you have access to exquisite views of not only Mt. Fuji, but also of the Southern Alps, Mt. Ontake, Mt. Norikura, and the Northern Alps. The area is also famous for being home to a treasure trove of different rare alpine flowers and other alpine plants. Take a ride on the Central Alps Komagatake Ropeway and experience one of the greatest expanses of natural scenery in Japan.

An onsen (温泉) is a Japanese hot spring and bathing facilities and inns are frequently situated around them. As a volcanically active country, Japan has thousands of onsens scattered throughout all of its major islands. Onsens were traditionally used as public bathing places and play a central role in Japanese domestic tourism today. 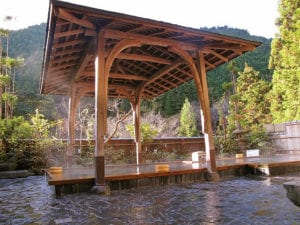 Gion Corner is a place where you can take in seven kinds of performing arts, most notably the kyo-mai dance performed by maiko dancers. Here, you can see Japan’s traditional performing arts in ‘digest’ form all on one stage. Located in Yasaka Hall next to the Gion Kobu Kaburenjo Theatre, the spot has a very international flavor, as it is popular with Japanese and foreign tourists.

Take a stroll around the Gion Historical Preservation District while heading to the Yoshi-ima Ryokan from Gion Corner. Enjoy exploring the narrow streets with many old ochaya (Japanese-style teahouses providing meals and performances of maiko girls and geiko women).

“Yoshi-Ima” is one of the traditional Japanese style Inn (government registered international tourist hotels) located in a very central part of the city of Kyoto. This place has a history dating back 1747 and now exists as a Japanese style inn. It is a fine artistic wooden structure and facing the historical preserved district in “Gion” area where many of them were high-ranked teahouses in former days.

The kimono (着物, きもの) is a Japanese traditional garment. The word “kimono”, which actually means a “thing to wear” (ki “wear” and mono “thing”), has come to denote these full-length robes. The kimono is always used in important festival or formal moments, it is the representative of polite and a very formal clothing.

Arrive in Japan – The Land of the Rising Sun. Upon arrival at Narita/Haneda Airport, receive a warm welcome. Transfer to the hotel in coach. Check into the hotel. Have dinner in a restaurant and stay overnight at your booked hotel in Tokyo.
2

Enjoy your breakfast at your hotel. After Breakfast, enjoy the infamous Zen Meditation in Tokyo. After meditating, enjoy the rest of the day for free leisure. Have dinner on your own and stay overnight at the hotel in Tokyo.
4

Breakfast at your hotel. After Breakfast, depart from Hamamatsucho Bus Terminal and head to Mt. Fuji by bus. Upon arrival to Mt. Fuji (subject to weather conditions) start with the Fuji Visitor Center, then go to Mt. Fuji 5th Station, and enjoy the Lake Ashi Cruise. Have lunch on your own and enjoy Mt. Komagatake Ropeway afterward. Depart Hakone and will disband at Odawara Station. Upon arrival, check into your hotel, have your dinner on your own and stay overnight at the hotel in Hakone.
5

Have your breakfast at your hotel. Check out and go to Odawara station on your own and proceed to Kyoto by bullet train. Then check into a hotel in Kyoto and proceed to the Kyoto Night Tour. Depart from the hotel and visit Gion Corner and Gion Historical Preservation District, also relish in a Japanese Tea Ceremony. Have your dinner in a restaurant. Come back to your hotel and stay overnight in Kyoto.
6

Take your breakfast at your hotel. After breakfast, head to Saganokan Shijo Main Store and select a Kimono. Get dressed and take a commemorative photo shoot. See the sights while wearing the Kimono and get back to Saganokan Shijo Store. Return to your hotel on your own and stay overnight in the hotel in Kyoto.
7

Enjoy your breakfast at your hotel. After breakfast, leave for a full-day excursion to Kyoto & Nara. Depart from Kyoto Station Hachijo Exit by bus. Visit the Kinkaku-Ji Temple, Nijo Castle, and have a Japanese Style lunch on your own. See the sights of Nara, such as Todaiji Temple and Nara Deer Park. Return to Kyoto, have your dinner, and stay overnight at the hotel in Kyoto.
8

After breakfast at your hotel, check out the hotel and transfer to Kansai Airport for your international flight.